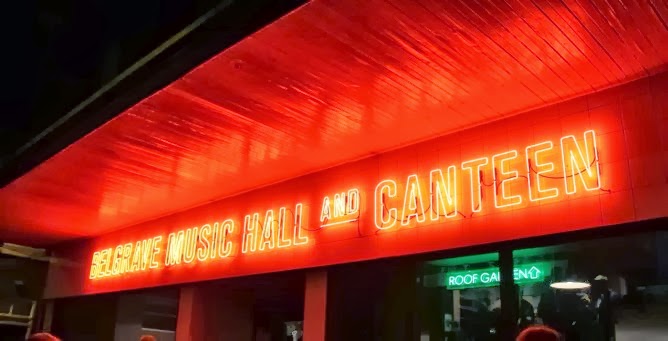 Photo courtesy of The Culture Vulture

Isn’t it satisfying finding somewhere new before everyone you know does?
Even I am a little late to the party with this one but luckily, I think I’ve made it through the door before the guest list closes and the only way in is to join the queue. I’m referring to Belgrave Music Hall & Canteen, BMHC from here on in, which opened it’s doors on 2nd October and is quickly establishing itself as a force to be reckoned with on the independent music and arts venue front.

On the night that the Christmas lights were switched on in Millennium Square, there I was dodging hoards of excited children and forlorn adults and slipping down past The Picture House on the corner of Merrion Street and New Briggate in search of Cross Belgrave Street, where BMHC can be found. I wasn’t really aware Leeds necessarily had quarters but if it does then head to the northern one and look for the orange neons, you can’t miss it. Friend of old in tow, we stepped under the blazing neon lights and into my new favourite watering hole. I’d done little research on it, so the night was full of surprises, all of them very pleasant indeed.

Belgrave Music Hall is the latest treat from Beacons Festival deities and creators of promotions company Super Friendz, Simon Stevens and Ash Kollakowski. There’s none of that synthesised ‘laid back’ feeling here, it’s all organic feel good vibes and happy faces. The ground floor was buzzing with chatter and a heterogeneous soundtrack, full of no fuss no frills people. With a healthy selection of cask ales, premium craft beers, lagers and ciders, and rumour has it, a cocktail menu, it would be easy to spend the night propping up the bar sampling their wares, but Smythsons cider in hand, I headed upstairs to the roof terrace first for a look around before settling into a convenient sofa.

How we define a venue is ever changing, there’s those that are strictly art, those that are film and those that are music, and of course food. BMHC have hit the nail on the head here, however. They have drafted in pizza experts Dough Boys to sell their stuff whole or by the slice from their first kitchen, and have street food gurus Northern StrEats curating the second. Chip shop modernists Fish& have also been known to make an appearance, and I might be right in thinking they’ve taken up a more permanent residency too. They’re hosting events for Leeds International Film Festival and their upcoming gigs and events calendar is full of promise.

It’s not the sort of place you can go to just once; there’s a lot to see and three storeys to explore, with the added benefit of the afore mentioned roof terrace. BMHC say on their website that their hopes are ‘it will provide artists and performers with a unique new platform in one of the UK’s most creative cities’ and I hope so too, I couldn’t like it more if I tried.

Originally written for Leeds Student
Posted by Unknown at 16:31