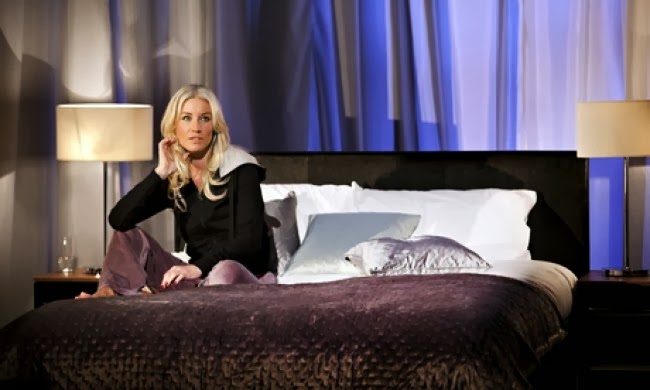 The words ‘one woman show’ immediately conjure up that episode of Friends where Chandler is tricked into watching an angry performance of Why Don’t You Like Me.
Fortunately for us though, Denise Van Outen has experience leading critically acclaimed one woman shows, and not a first period in sight. She was the lead in Tell Me On A Sunday, an Andrew Lloyd Webber and Don Black musical from 2001, which assures us that her current offering will at least be entertaining. Her new one woman show Some Girl I Used To Know premiered at the West Yorkshire Playhouse this week.
It is inevitable that when it comes to a show like this, its apparent trivialities and frivolities will work against it, especially when it’s set to hits from the 1980s and 90s. Denise Van Outen and Terry Ronald’s Some Girl I Used To Know is not the trivial and frivolous play it might seem; this one woman show deals with the soaring highs and tragic lows of a self made woman who appears to have it all. The show’s most important saving grace is that more than anything, it’s relatable. This is only confirmed by the attendance of a mostly female audience whose average age is around that of Van Outen’s, whose laughter and gasps create an atmosphere of sentimentality and ‘been there done that’ joviality.
Ronald and Van Outen’s introduction in the programme argues that “although there are many more opportunities for women in 2014 than there were in the 1980s, their tribulations and heartbreaks are much the same”. Quite right too, although the music may put a heavy time stamp on the show, the sentiments traverse many generations. The audience are invited to watch Stephanie Canworth unravel, as she ventures down memory lane after hearing from an ex-boyfriend on Facebook. Even for a member of the audience who is perhaps younger than the target demographic, it’s still easy to identify with Van Outen’s character and the underlying themes here.
Although it’s not the most groundbreaking piece of theatre and the acting isn’t necessarily Olivier-worthy, the singing and the staging definitely makes up its flaws. The show does exactly what it says on the tin, so to speak. There’s definitely reason to cringe in parts, but the set is slick, the songs are catchy, the humour is smutty and the audience leave smiling from ear to ear.

Originally written for Leeds Student
Posted by Unknown at 16:34