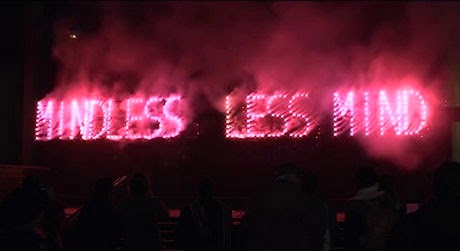 For the first time American artist Dennis Oppenheim, famed for his illustrious work with pyrotechnics and his constant assault of the limits of sculpture, has been the focus of an exhibition away from the watchful eye of his widow and protector of his legacy, Amy Plumb.
Thought Collision Factories occupies three gallery spaces in the Henry Moore Institute. It showcases Oppenheim’s new thinking in sculpture, which propelled him through five decades of exploration and experimentation of actions, performances, installations, film and architecture.

This type of work commands the viewers’ attention. Years after it was first shown to the world, it still holds the same wonder. The often ambitious and technical physical works documented with lo tech equipment are beautiful and unambiguous, they are a perfect documentation of an action and a moment in time rather than a developed and esoteric bi product. Oppenheim’s 1972 piece ‘Polarities’ is the most intimate and personal of the exhibition. He bares his father’s last graphic gesture and one of his daughter’s first drawings and marks them out in a barren landscape, the grainy aerial documentation shows the glowing red magnesium flares which brand the landscape under the cover of darkness, the effect is serenity and a quietness which is quite the opposite of the burning reality, the rasp we know to be a character of the flare is muted and the we are left with the aesthetic.

Oppenheim tends to overwhelm the senses; his use of pyrotechnics and mechanical forms in works like ‘Vibrating Forest (From The Fireworks Series)’ the gargantuan 1982 sculpture which employs heat, movement, flares, and motion to create candy floss in the second gallery is a  visualisation of ideas coming together. The process of piecing together and constructing something physically which is then transformed by fireworks and flares forming a catalyst allowing the creation of candy floss is very much a parallel drawn between the visualisation and the making of art. The visualisation of ideas is of thematic importance; Oppenheim pursues his ideas through sculpture and three dimensional forms first and two dimensional work only after the sculptural form is finished.

Text works spelt out using flares on armatures, 1974 ‘Avoid the Issues’, 1975 ‘Narrow Mind’ and ‘Mindless Less Mind’ will be recreated on the Wednesday nights following the opening night of the exhibition further reiterating the importance of sound and smell in Oppenheims’s work and the drama of the pieces to be witnessed first hand. This will take place in front of the Henry Moore Institute and subsequently brought inside to be displayed the gallery ‘marking the white interior of the Institute with both their scent and surface’.

There is a vast amount of work on show, which makes for an intense experience but not necessarily a negative one. The videos are a particularly strong element and the ‘Vibrating Forest’ will be switched on at intervals throughout the time the show is open.

Originally written for Leeds Student
Posted by Unknown at 16:50